The 3rd Swiss Venture Capital Report collects data about the funding that occurs to Swiss startups in 2014, and offers some interesting discussion points about the global scenario, recurring trends and the peculiarity within different industries.

The news portal startupticker.ch has released it, in collaboration with the Swiss Private Equity Corporate Finance Association – SECA, the Commission for Technology and Innovation – CTI and the School of Management Fribourg.

To have a better understanding of the Swiss startup scenario, the report focused just on venture capital investment while buy-out investments, strategic partner acquisitions, and crowdfunding campaigns were not taken into account. In addition, the data collected only relied on fundings that were made public through statements or that were communicated in another way.

In general the amount of the total transactions has increased by 10% compared to what was recorded in 2013, reaching a volume of CHF 457 million. The number of financial rounds remained practically the same at 92 in 2014. 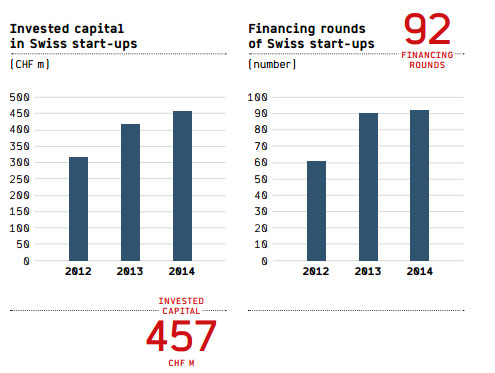 During the last year, life science sectors rose to the highest percentage of the total funding, reaching CHF 355 million – more than three-quarters (78%) of the total invested capital similar to the 2013 figures. Having biotech investments reporting the same performance as of last years while Biotech and Healthcare IT funding’s have increased respectively to 152,9 M and 12,5 M. 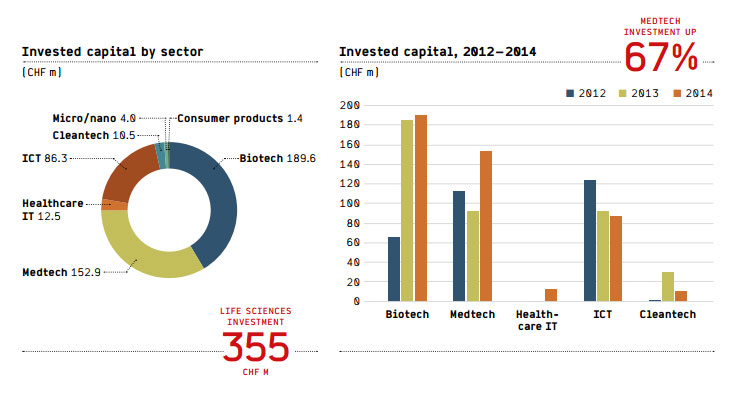 The IT industry shows an investment decline for the second consecutive year. The total amount invested in IT, Swiss startups in 2014 is 83,5 M, just 19% of the total funding.

Despite less funding and less money being invested in the IT industry, the number of private companies that have been funded has risen sharply from 30 companies in 2013 to 45 companies in 2014, and this is attributed to the early stage startup fundings. 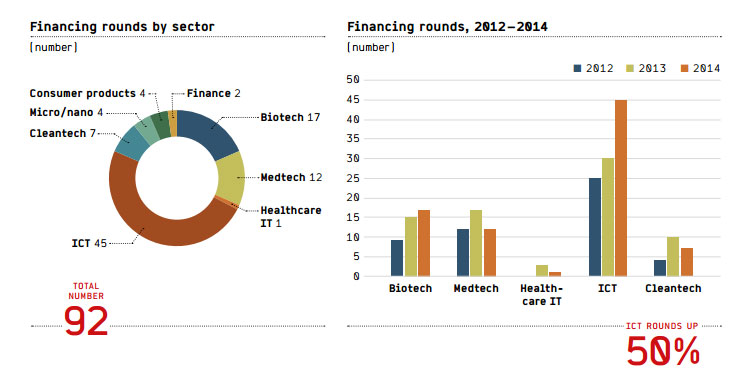 Medtech rose to 79% of the total amount invested which has been split into 30 companies while IT industry represents just 19% of the total money invested.  This funding has been shared between 45 companies (which is 50% of the total round that took place in 2014).
Switzerland is, therefore, conducive for Biotech and Medtech and exquisite on patents and innovation. The country, however, presents a challenging environment for IT (or computer science) not because of a lack of ideas, talents or execution but rather the difficulty in raising significant rounds of financing (let’s say CHF 500k).

But the future is not black. In the last two or three years, successful startup program have popped up throughout the whole region, and they have received a growing number of applications. This is real proof that Swiss people are more and more interested in the startup businesses as a viable, attractive career path.

2015 will be the Pivot Year for Venture Capital

Inside the World of Accelerator Programs